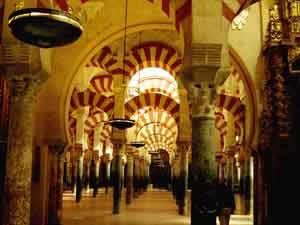 the interior of the Great Mosque in Cordoba

Ibn ʿArabi was born in Murcia in southern Spain on 27 July 1165 CE (17 Ramadan 560H), at a time when the lands of al-Andalus had already been under Muslim rule for over 450 years. At the age of eight, he moved with his family to Seville, which remained his home for the next 27 years.

When he was about 16, he experienced a strong calling to turn to God and he entered into a retreat, during which he had a dream-vision of Jesus, Moses and Muhammad, the prophets of the three major religions stemming from Abraham. As a consequence of this retreat, he was sent by his father to meet the famous philosopher Ibn Rushd (Averroes) in Cordoba.

Ibn ʿArabi began to study the Quran and Hadith in earnest, and soon came under the instruction of his first spiritual master, al-ʿUraybi. During his youth Ibn 'Arabi kept company with many spiritual teachers, men and women, in Seville and throughout al-Andalus and the Maghrib (North Africa) – later he wrote about them in his Ruh al-quds (Epistle of the Spirit of Holiness). He recounts many mystical experiences, visions and revelations, including meetings with Khidr, the immortal guide who imparts hidden mysteries. In 1190 in Cordoba he had his great vision of all the prophets, from Adam to Muhammad – a theme which found its most complete expression in his masterpiece written nearly 40 years later, Fusus al-hikam (Gemstones of the Wisdoms). 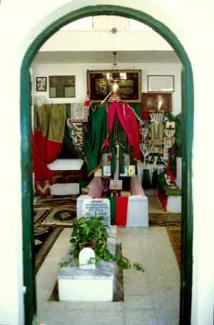 In 1193 he left the Iberian Peninsula and travelled to Tunis to visit Shaykh ʿAbd al-ʿAziz al-Mahdawi, one of Abu Madyan's pupils. While there, Ibn ʿArabi entered “God's Vast Earth” or the “Earth of Reality”, an intelligible, spiritual realm in which the real, effective adoration of God takes place. On his return to Seville he began his writing career, with the Mashahid al-asrar (Contemplation of the Holy Mysteries) being one of the very first books he composed.

In 1197 he experienced a dramatic spiritual ascension in the city of Fez, which he recounted in his Kitab al-Isra (Book of the Night-Journey):

“I gained in this night-journey the true meanings of all the Divine Names, and I saw that they all referred to One Named and One essential Reality. This One Named was my object of contemplation; that One Reality was my own being.”