The Gemstones of Wisdom 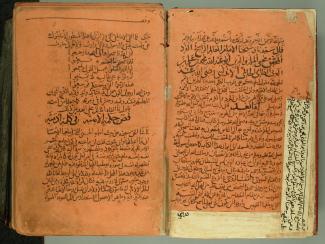 The Fusus prologue in Sadr al-Din al-Qunawi's hand
Considered by many to be Ibn 'Arabi's greatest masterpiece, this book was written in Damascus in 627/1230. It consists of a prologue and 27 chapters describing the wisdoms deposited within 27 prophets of the Western religious tradition. Each prophet is considered as a setting for a particular wisdom: for example, Divine Wisdom in a Word of Adam, or Singularity Wisdom in a Word of Muhammad. Together these wisdoms express the multifaceted nature of One Reality.

I saw the Envoy of God (may God bless him and give him peace) in a dream-vision of good news (mubashshira), which I had in the last 10 days of Muḥarram in the year 627H in the city of Damascus: in his hand was a book, and he said to me: “This is the book of the Fuṣūṣ al-ḥikam, take it and bring it out to people who will benefit from it.” I replied: “Hearing and obedience are due to God, His messenger and the people entrusted with authority amongst us, as we have been ordered”...  I communicate nothing that has not been communicated to me, nor do I reveal in these lines anything but what has been revealed to me. I am neither a prophet nor a messenger: I am but an heir, one who labours for the good of the other world.

It is from God, so listen! And it is to God, so return!

When you have heard what He has given to you, become aware

Then with understanding, distinguish all the details of the whole and bring it together

Then bestow it upon the one who seeks it – do not withhold it!

This is the Mercy which has extended over you – so extend it!