The Twilight of the Stars 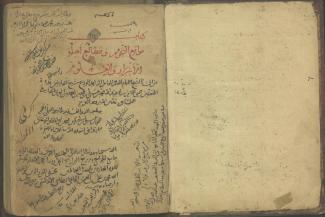 opening page of Majles 594
Written in eleven nights in Almeria during Ramadan 595/1199 for his disciple Badr al-Ḥabashi, this book describes the three degrees of surrender (islām), faith (īmān) and right action (iḥsān), according to three levels of possible realisation.

"We wrote it in eleven days during the month of Ramadan in the city of Almeria, in the year 595. This book dispenses with the master, or rather the master himself also needs it. For among masters, one will be higher than another, and this book is on the highest level that the master can reach. There is no station higher in this sacred Law through which we are devoted to the worship of God. Those who own this book will find sustenance in it, with the help of God, since its benefits are immense."

In particular Ibn ʿArabi describes the ways in which the seven external parts of the body (eyes, ears, tongue, hands, stomach, genitals, feet) and the central organ of the heart participate directly in Divine praise.

See also...
Ibn ʿArabi in the West (1165–1200)
Related Links
The Journey through the Circles of Being
Copied to clipboard