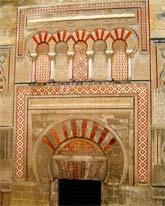 An entrance to the Great Mosque, Cordoba

The greatest mystical genius of the Arabs, he has left his mark on all subsequent mystical literature.
A. J. Arberry

Muhyiddin Ibn 'Arabi (1165–1240) is unquestionably one of the most profound and remarkable figures in the history of world spirituality, and became known within the Islamic world simply as 'the Greatest Master' (al-Shaykh al-Akbar). He provided the most comprehensive understanding of Islam from its most literal to its most profound meaning, and his influence upon later generations of spiritual masters can be seen in countries as far apart as Spain and Indonesia.

Ibn 'Arabi's writings are founded on a totally harmonious vision of Reality as One and Many, integrating all apparent differences without destroying their truths. They are singularly appropriate and needed in the world of today.

Ibn 'Arabi is one of those rare and powerful spiritual individuals who are the norm of their own orthodoxy and of their own time, because they belong neither to what is commonly called "their" time nor to the orthodoxy of “their” time.
Henry Corbin

In the Islamic world, probably no-one has exercised deeper influence over the intellectual life of the community over the past 700 years.
William C. Chittick