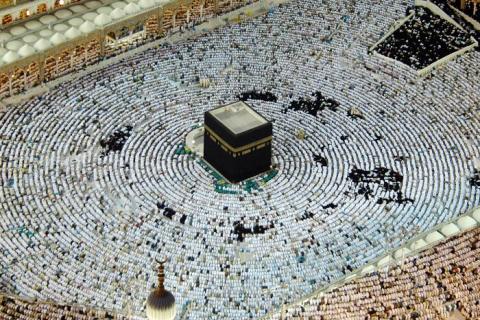 Ibn ʿArabi's story of the Kaʿba built of silver and gold bricks:

I had a vision concerning myself, and took it as good tidings from God. For it was similar to a tradition of the Prophet, in which he indicated his position in relation to the other prophets.

He, upon him be peace, said: “As regards myself and the prophets, it is as if a man built a wall, leaving out one brick. I am that brick, and there will no envoy or prophet after me.”

When I was in Mecca in the year 599 AH [1203], I had a dream in which I saw the Kaʿba built of bricks of silver and gold, placed alternately. The construction was complete, and there was nothing left to add. I contemplated it and admired its beauty.

Then I turned to the side between the Yemenite and Syrian corners – near the Syrian corner I noticed there were two bricks missing, one gold, one silver, on two rows of the wall. The missing gold was on the upper row, the missing silver on the lower.

I saw myself being put into the place of these two bricks.

Then I woke up, and gave thanks to God, saying to myself: “I am to the followers of my kind, as the Envoy of God is to the prophets.”